Meghan made me cry and her eulogy reflects truly the qualities of her father’S character, devotion to family and country, goodness and heroism, all around a decent being. She is right when she said, they were woven in her too. WOW. She made me yearn for the same America where people were decent, civil and willing to live with each other.

Meghan McCain’s eulogy: “The America of John McCain has no need to be made great again”

She alluded to President Trump in an emotional speech 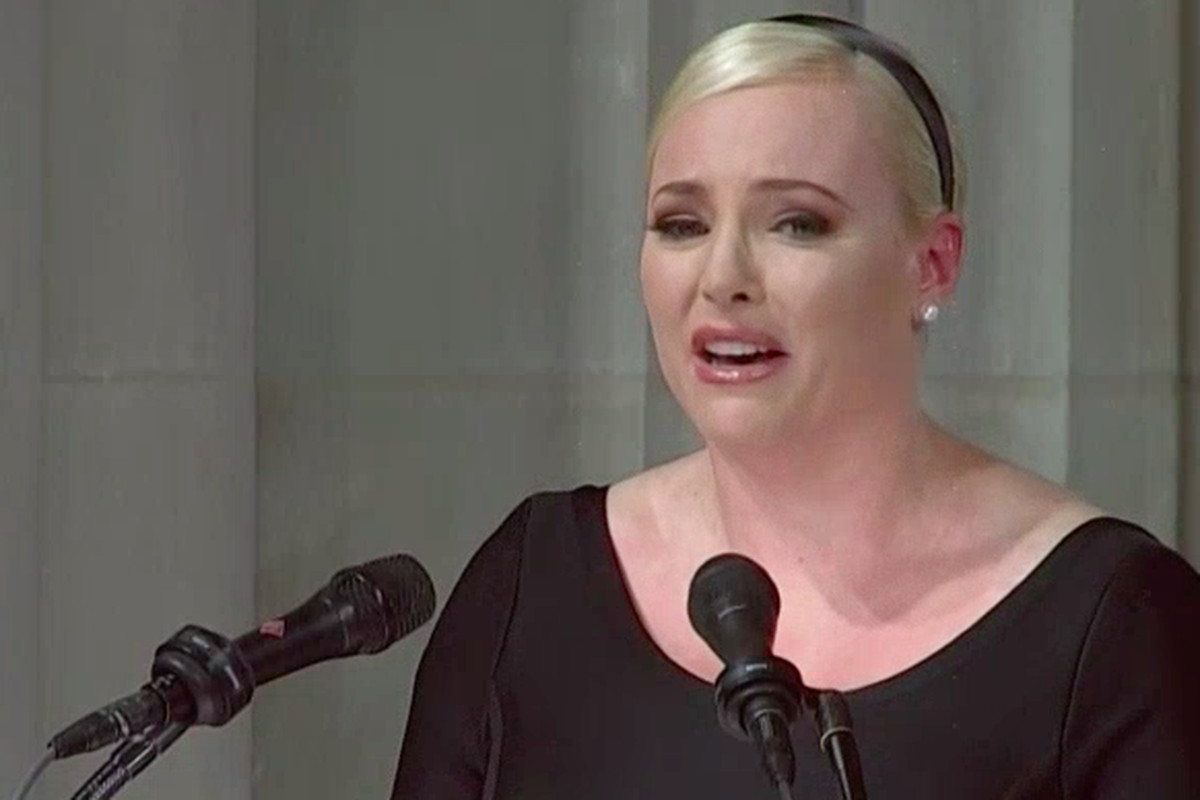 In an emotional eulogy sharing her memories and love for her father Saturday, Meghan McCain made sure to make her opinions on President Donald Trump very clear.

John McCain “was a great man,” she said. “We gather here to mourn the passing of American greatness — the real thing, not cheap rhetoric from men who will never come near the sacrifice he gave so willingly, nor the opportunistic appropriation of those who lived lives of comfort and privilege while he suffered and served.”

It was an obvious reference to President Trump, whose campaign slogan is “Make America Great Again,” and who got four draft deferments to avoid serving in the Vietnam War.

Later, Meghan McCain was even clearer: “The America of John McCain is generous and welcoming and bold. She is resourceful and confident and secure. She meets her responsibilities. She speaks quietly because she is strong. America does not boast because she has no need. The America of John McCain has no need to be made great again because America was always great.” Applause followed.

McCain memorial: ‘The America of John McCain has no need to be made great again’

Meghan McCain, in an emotional and deeply personal eulogy of her father, took a tacit swipe at President Trump several times during her remarks.

But the most pointed was when she said, “The America of John McCain has no need to be made great again, because America was always great” — a reference to Trump’s campaign slogan. Rare for such a solemn gathering, applause rippled through the cathedral for several long seconds, passing over an audience which included Trump’s daughter Ivanka and son-in-law, Jared Kushner, who sat stone-faced.

Trump, a frequent antagonist of McCain, was not invited to the memorial service. Meghan McCain, daughter of the late senator John McCain speaks during a memorial service for her father at the Washington National Cathedral. (SAUL LOEB/AFP/Getty Images)

Earlier in her speech, she also referenced her father’s “greatness,” saying his was the “real thing, not cheap rhetoric from men who will never come near the sacrifice he gave so willingly.”

“The best of John McCain, the greatest of his titles and the most important of his roles, was as a father,” she said.

As the solemn motorcade carrying the body of Sen. John McCain made its way past the Washington monument Saturday morning, within eyesight of the White House, President Donald Trump was busily churning out a series of tweets attacking the FBI, Department of Justice, the news media and Canada.

Trump made no reference to the senator’s passing, even as the luminaries of Washington —including three former presidents — began gathering at the National Cathedral for a memorial service.

Trump, who McCain pointedly declined to invite to the service, began the morning tweetstorm at 7:19 a.m., with a slap at the state of the news media just as Fox, CNN and MSNBC were beginning to roll out their wall-to-wall coverage of the day’s events.

Two minutes later, the president took a swipe at Canada, which declined to sign a trade agreement on Friday, saying, “I love Canada, but they’ve taken advantage of our Country for man years.”

After an hour’s pause, at 8:26, one minute after MSNBC began its live coverage of the McCain family gathering at the steps of the Senate, Trump cranked out his third tweet of the morning. It was so long, it turned into a five-parter, long enough for McCain’s motorcade to make a brief stop at the Vietnam Memorial and all the way to the Cathedral.

The topic, on McCain’s final day in Washington, D.C., involved the Foreign Intelligence Surveillance Court. He quoted from a Friday night appearance on Fox’s Hannity program by Tom Fitton, president of Judicial Watch, a conservative activist group. Fitton was discussing a Judicial Watch response to a court-filing by the Justice Department regarding wiretap warrants on Carter Page, a former foreign policy adviser to the Trump campaign.

At 8:32 am., as the casket carrying McCain’s body was being carried from the Senate Rotunda to a hearse for the trip down Constitution Avenue, Trump unleashed part two of the FISA tweet, this time picking Fitton’s description of the leadership of the DOJ and FBI, who are both Trump appointees, as being “completely out to lunch.”

During a 47-minute pause, the McCain motorcade rolled past the Justice Department building, then passed between the White House, on the right, and the Washington Monument, on the left, ringed with flags at half-staff in McCain’s honor.

Silence from the Trump twitter-feed as the cable channels showed Cindy McCain, widow of  the late senator, standing before a wreath in McCain’s memory at the Vietnam Memorial wall. She was escorted by Trump’s chief of staff, John Kelly, and the secretary of defense, James Mattis.

At 9:19 a.m., as Jared Kushner and Ivanka Trump arrived at the National Cathedral, where they were greeted by longtime McCain pal Sen. Lindsey Graham, R-S.C., Trump fired off the the third segment of the FISA tweets, with quotes on the “Fake Dossier” purportedly containing incrimination information on the president.

Report: There were no FISA hearings held over Spy documents.”It is astonishing that the FISA courts couldn’t hold hearings on Spy Warrants targeting Donald Trump. It isn’t about Carter Page, it’s about the Trump Campaign. You’ve got corruption at the DOJ & FBI. The leadership….

As the motorcade resumed the trip to the National Cathedral, Trump jumped back into his morning tweeting with the fourth part on the “Fake Dossier,” this time including a swipe at Hillary Clinton and Barack Obama, who, coincidentally was at that moment in the cathedral preparing to deliver a eulogy for McCain at the senator’s request.
READ MORE

McCain memorial: ‘The America of John McCain has no need to be …

https://www.washingtonpost.com/…/mccain…by…/1c180bb8-ad5c-11e8-b1da-ff7faa680…
24 mins ago – Meghan McCain, in an emotional and deeply personal eulogy of her father, took a tacit swipe at President Trump several times during her …

President @BarackObama eulogy to Sen. #McCain: He knew Americans’ membership is not based on our bloodline, it’s not based on what we look like or how soon our parents came here but on adherence to a common creed: We are all created equal

About the Author: Admin MJ